OKay so no new patterns this week but a thought occured to me while I was wasting time on Ravlery this morning, actually adding a pattern to my embarassingly short queue. Ah ha! bet you thought I was one of those chronic queuers, who add a zillion patterns to their queue with the misconception that they will actually have time to knit all of it. NO actually I am much worse than that, I add almost nothing to my queue, preferring not to commit to something until it is halfway done, and even then it may never make it into the projects folder. Why is this? I suppose because I never seem to have time to actually plan out projects to knit that someone else has designed. I usually knit patterns by someone else because either I saw it loved it and had to start this very second making the queuing process difficult and unnecessary. Or I am desperately nursing a case of startitis and manage to sneak into the yarn cupboard with a pattern I have seen in mind. ALso hindering the planning ahead process and I never should have been starting something new in the first place as I have other people's deadlines to deal with first! WHich brings me to my other thing that I completely neglect on ravelry but love love love in real life. The Stash Section.

It has crossed my mind to load up all the yarn in my stash onto Ravelry so that it is oganized and available for when I have that startitis moment. So I won't be crammed into the 100 year old closet in my upstairs that is really a glorified hole under the eaves trying not to bash my head on the iron bar someone installed to hang clothes (really? hang clothes? in my yarn stash?) and up to my elbows in Rubbermaid tubs that somehow need to move and can't be shifted to due leverage space issues. Instead of that fabulous moment I could sit in front of the computer and scroll down the page to see everything that I own and can play with. Sounds great... right?... no way! I love the digging, scrunching my hands down into a bin filled with fibre, feeling around to find just the right one. Perhaps it's the one that I really wanted and perhaps not, more often than not there is a squeal of delight when I find the long lost purchase of some great sale from months ago that I had totally forgotten about until it was just unearthed .

There is always a certain amount of frustration, the aformentioned bar being one. I mean what are teeny closets for but placing lethal bars in the ceiling of? And then inevitably there is that one ball of yarn that is really needed, but was moved, to another bin perhaps or to a knitting bag awaiting a project that never got started. Where to find it? it may be in with the cottons? really that ball of wool silk? no perhaps with the bin labeled Expensive Yarn do not waste it, nope not there. A search abandoned after an hour or more just to relocate the lost yarn in with the baby acrylic for whatever reason ( more than likely laziness).

I've actually managed to make a few Christmas gifts this year using someone else's pattern and yarn from the stash... I know.. I found it shocking too. Here they are, a great Inside Outside scarf for my dad, and a calorimetry for someone else who I won't mention because there is the distinct possbility she reads this blog :) 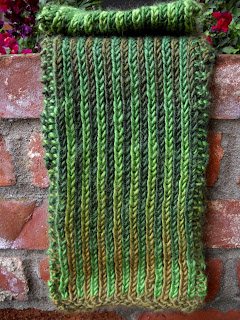 This actually uses that terrible Debbie Mumm traditions stuff, but my dad is so sensitive to wool that it ended up being the perfect yarn, and I already owned it. 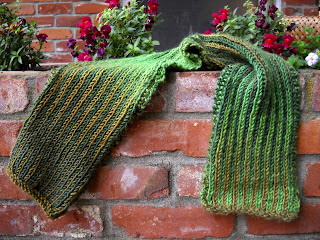 ANd the Calorimetry is done in scraps of knitpick's swish worsted, probably one of my favorite standby's 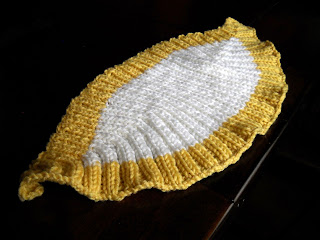 Actually I think that I may challenge myself to catalogue all of the christmas gifts this year. I find that with all the super secret knitting that goes on here I don't blog in this space as much as my newfound speedy typing skills will allow. :)
Share
Share +1