Well Monday again, so nothing has really made it off the needles however there are projects surfacing everywhere in the race to compile gifts for Christmas. Even though the hubs and I started earlier this year, stretching out all that accumulation over a few months in the hopes of avoiding a heart attack when January bills arrived, we are far from done. All the well meant planning of knitted gifts is slowly being whittled down, from two gifts each to one, to.. well do I have anything started? Something about having two young kids, a new puppy and a cantakerous pair of older animals means so very little time. However thanks to the efforts of the hubs I do get more crafting time than most. And now, to what I found today in the basket on the sideboard: 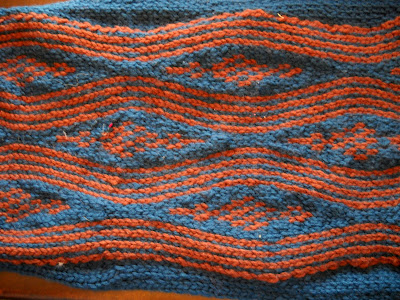 This happens to be my rendition of the Fair Isle Rapids scarf from Knitty, which I am totally in love with and would finish in an instant if it weren't for a few minor things. First of all I started this scarf on needles that I think were a size too small, obviously following tradition; I subsituted yarn for the pattern, and checked gauge but didn't count on the stiffness of the two yarns together in the fair isle pattern. In addition this yarn shows my dirty little secret I used to wrap backwards Shhhh.. don't tell anyone, but if you look really closely the stockinette stitches are really twisted stockinette stitches. As a mostly self taught knitter, I say mostly because my mom really did put the needles in my hands and say ready, set, go! but I went from there, and from there to here have been a few stumbling blocks. Took me a long time to actually figure out why my knitting had that funny twisted look, thought maybe it was because I happened to be funnny and twisted myself. But actually turned out to be wrapping the knit stitches backwards, so the dilemma: now that I wrap the right way after the great discovery do I head backwards, rewrap the wrong way and finish? Or.. frog it?

Hmm... I am thinking about frogging it :) gasp! If I continued in the new wrapping I think it would be obvious, and by obvious only I would know.. well and you. But it would still force me to forbid my Hubs from wearing it anywhere but out to walk the dog, and then with strict inctructions to complete a quick toss and run if anyone approaches.

And it is stiff,  if I used larger needles it would have more drape and be larger and less knitting to finish... but would it be done by Christmas? no probably not, yet again this little beauty would look on from it's sad little basket on the sideboard watching all the decorations come and go, waiting for a neck to warm. Speak to me scarfy tell me what you wish. 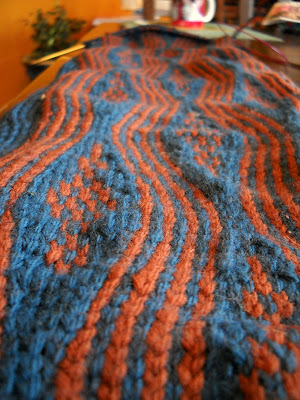